Sometimes the simple or basic ways are the best, or at least worth a try.
One of the earliest ways of producing a stereo effect using just two microphones was invented by the brilliant electronic engineer, Alan Blumlein, in the early 1930's.
It involves the positioning of two microphones or two microphone capsules one directly over the other, pointed at right angles to each other and facing the sound source.

These are two ribbon mics in this arrangement. 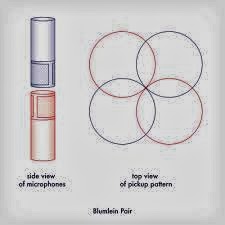 A ribbon mic can pick up sound equally from front
and back. 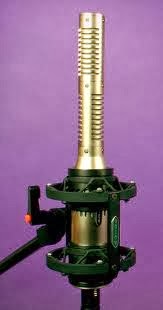 The SF24, with built-in preamplifier, 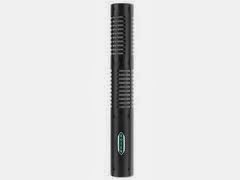 and the SF12, without preamplifier.  I have one of these, and have successfully recorded small and large ensembles using this excellent pair of matched ribbon mics.
A high quality, high gain mic preamplifier is most important, as the output level of ribbon mics is quite low.


Enjoy this sample of a Blumlein technique recording of a concert band, recorded some years ago at a public concert (mic placement was not exactly ideal, as you might imagine!)

Thanks for listening and reading!

From time to time I want to share some recordings I have made with you.
The problem is....Blogger will not, it seems, allow me to insert audio files on my page, only photos or videos.  Sooooo,  maybe this workaround will be the way to go.

Here is a recording made a few years ago of an acoustic guitar, using a spaced pair of matched omnidirectional condenser microphones.  The musician is David Baillie.  (Hope you don't mind, Dave!)

I was reminded yesterday of the fragility of a person's audio treasures.
The lady with the enquiry was most concerned that an album she owns on a music cassette is no longer available to purchase new in any other medium.  She wanted to preserve her tape by transferring it to CD format as she does not have access to a cassette tape player.  No problem:  I seem to be doing quite a bit of this lately.

No-one really knows where sound and video recording and replay technology will go in the future.  Formats come and go....anyone remember the 8-track cartridge?  It used quarter-inch magnetic tape in a chunky cassette,  first appearing in Lear Jets and later in many cars.  Check out ebay for tapes and even players.
Back in the early '60's my first foray into HiFi involved a turntable for playing the new stereo LP's and an open-reel recorder for music tapes.  The records, except for ones I discarded or sold, are still playable, but the tapes have met their demise over the intervening years.
My greatest audio treasure is a 10inch, 78rpm acetate ( a type of plastic ) disc of my father singing two songs.  It was cut in the early '40's in a small studio somewhere in Melbourne.  With careful transfer and state-of-the-art noise reduction software, it doesn't sound half bad.  I only wish my mother's fine coloratura voice was recorded somewhere.

So where are we going recording-wise?  Deeper into the digital domain, it seems.  There is quite a bit of discussion as to the best digital recording system - the one that will best preserve all the information captured by the microphones employed at the time.  Sony is heavily promoting its 1-bit DSD digital encoding format, as in SACD discs, while the rest of the professional and amateur recording world uses some form of PCM, multi-bit system.  A few die-hards prefer the recordings made by tape machines.
Does the average person buying the music of their favourite group or composer really care?  I think not.  Just consider the popularity of downloads from iTunes, etc.  Thankfully high resolution downloads are becoming increasingly available for those of us who appreciate quality reproduction of our music.
After quite a bit of research, I have to say, in my opinion, the best current, affordable, practical recording format is 24bit, 192KHz PCM, using best available encoding hardware (interfaces) and software.  DSD is a close second, but subtle artifacts from high-frequency noise are an issue.  No digital system is perfect.  No replay system is perfect.  We can only hope, at this present time, to approach the level of audio perception of the human ear and brain.
Every recording system is both fragile and ephemeral.  Some folk have thousands of tracks on their computer hard drives.  But hard drives fail.  Records and tapes wear out or are damaged beyond repair.  Formats come and go....anyone heard of Elcassette?  Thought not.
But take heart - even some of the Edison wax cylinders and players are still going strong, after more than 100 years!  Not a bad record.
Posted by Unknown at 16:12 No comments: 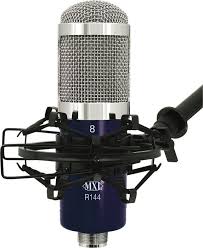 The advent of the "wireless" (radio) in the 'twenties saw the development of microphones suitable for reproducing both the human voice and musical instruments with appropriate fidelity and clarity for the home listeners.  The old carbon and crystal types just wouldn't do:  frequency response and ease of use had to be drastically improved, especially in the new motion pictures with sound.  Enter the ribbon microphone.

This is a famous example from the 'thirties from RCA.  Used in studios and on location by countless commentators, newsreaders, talent and musicians throughout more than four decades, and still going strong in many commercial music studios today, if you can afford one, that is.
Compared to, say, a typical condenser mic., ribbon microphones tend to be classed as "warm", "smooth", "un-hyped", etc.
Because of their construction, they pick up sound from front and rear sides, nearly always equally, but not from side sources.  More on pick-up patterns at some point in the future.
As moving-coil (dynamic) microphones improved in sensitivity and frequency response, ribbon mics were used less often, especially in announcing roles. 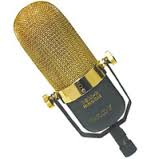 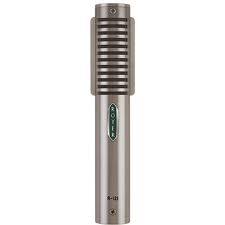 Recent years have seen growing interest in ribbon microphones, with many manufacturers designing and producing variations of this type of mic. 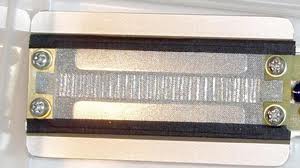 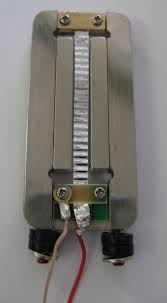 These two photos of the "motor" of a typical ribbon mic. show a magnet assembly on each side of a piece of crimped or folded aluminium foil, the two ends of which are connected to a miniature matching transformer (not shown in the photos).  The foil strip is typically 4 or 5 millimetres wide, anything from 50 to 80mm long and only about 2 microns thick - about the same thickness as the "silver paper" often serving as a wrapper around you favourite chocolate bar.
The magnets are strong, but the ribbon is very flimsy - never blow into a ribbon (or condenser) microphone to see if it is working! 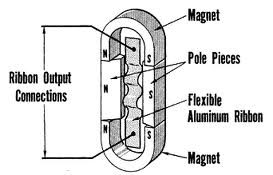 Sound causes the ribbon to vibrate in sympathy between the poles of the magnet(s), causing a weak electric current to flow along the length of the metallic ribbon.  A small transformer in the microphone body provides the correct voltage and electrical impedance ( Never mind!) for the microphone preamplifer.  Some versions of ribbon mic. include a preamplifier in the microphone itself:  they are termed "active" ribbon mics.  A fair bit of "gain" is needed for the low-output ribbon mic., even more than is required for dynamic types.  High gain, low noise preamps are mandatory.

I must admit that some of my favourite microphones are ribbons.  So far, only three - a Royer stereo type, a custom long-ribbon type from O.P.R. in Wiiliamstown, and a modified MXL R144 (see top of page), improved by replacing the ribbon and transformer.  Thanks, Mark at O.P.R..

Don't forget, if you have any questions or comments, please feel free to contact me via email, or through the comments box. 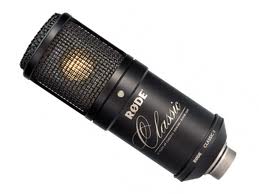 This design of audio transducer is the most common in use today - every variation from "spy" mics and tiny mics in the top of laptop computer screens to large versions, such as the one on the right, found in recording studios and sometimes on stage.
Purchase prices can vary from less than $20.00 to over $5,000.00 per unit.  Some can be hand-held, for vocal work;  others require isolating mounts because of their sensitivity to being handled.  Most of the cheaper models use a battery, usually a "AA" 1.5V cell, fitted in the body of the microphone.  All condenser ( or capacitor ) microphones require a power supply to work.  Studio types, such as the one above, are provided with power from the mixing console or preamplifier to which they are connected.  This is called phantom power, and is set at 48Volts.  The power supply for the mic. and the signal from the mic. use the same 3-conductor cable:  quite an ingenious arrangement! 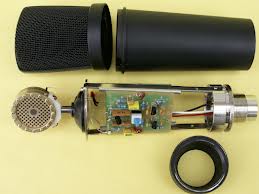 How do they work?

This is a partly disassembled studio condenser microphone.  The top two pieces are the head basket, which protects the capsule ( the transducer part ) and the main body, which houses the electronics and the mount for the cable socket.  The ring at the bottom of the picture screws the whole assembly firmly together. 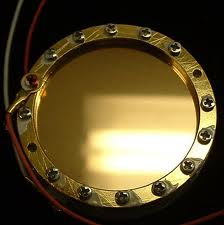 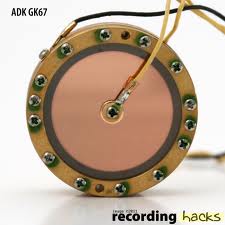 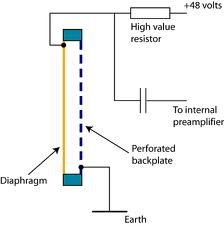 The diagram on the right shows the basic design principle, edge-on view, of a condenser mic.
Sound hits the tight mylar  (plastic) diaphragm, which is rendered conductive by spattering with a very thin coating of metal, usually gold.  This diaphragm is typically only 5 or 6 microns thick, and is very responsive to the slightest sound:  wide frequency response and great detail are features of this type of microphone.  The movement of the capsule diaphragm produces changes in the electrical capacitance between the diaphragm and its associated backplate, which is a much heavier, perfectly stiff disc of brass (usually), through which an array of small holes has been drilled.to allow free air movement.  The microphone electronics convert this fluctuating capacitance into a voltage and current which can be amplified for use in a recorder or mixer.
Usually the electronics are "solid state", as in the above mic. interior illustration, but some of the classic and even modern designs use a low-noise audio valve (tube), with its own special power supply unit.  This type of mic. can be quite expensive, but very sweet-sounding! 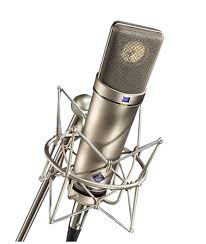 I wouldn't mind one of these in my collection! 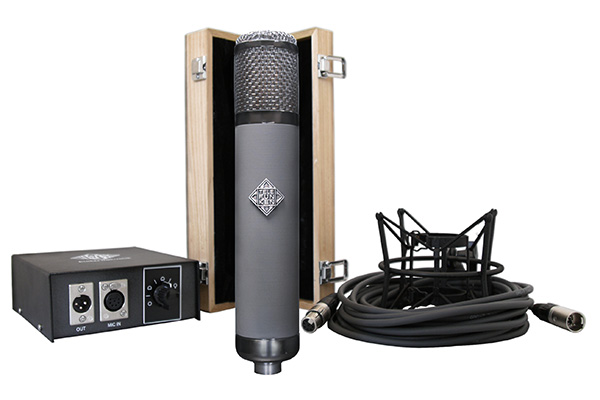 Or one of these!  Maybe two would do.

Until next time, when we'll discuss ribbon microphones.
Posted by Unknown at 21:48 No comments: